The Newport Ship project, the story so far

The Newport Ship project, the story so far

Since the ship’s discovery and excavation, in 2002/3, the timbers have been cleaned and recorded, and the majority have finished the ammonium citrate and PEG stages and are now being freeze-dried. The freeze-drying is being carried out primarily by the York Archaeological Trust, but some timbers were too large for their facilities and were instead sent to the Mary Rose Archaeological Trust. This conservation process is nearing completion.

In late 2014 the Project moved from its original base in the Maesglas industrial estate to the current site just south of the Spytty retail park. Visitors to the Ship Centre can see many of the conserved timbers in the two environment-controlled stores, along with a number of artefacts and some of the first pieces to be put back together. Many of the other artefacts from the ship are on display in Newport Museum.

Work led by Professor Nigel Nayling, a timber specialist at the University of Wales, Trinity Saint David, has established that the trees used to construct the ship were probably felled in the upland interior of the Basque Country around 1449. This research was carried out in coordination with experts from Iberia, and has contributed greatly to the building of much fuller tree-ring databases for that area.

Most recently (autumn 2018) our Basque friends have further identified the actual woodland from which our timbers were harvested and together we are following this trail further in the hopes of finding out more information about our Ship.

Meanwhile, the recording of each timber using 3D-spacing technology has allowed for a 1:10 scale 3D printed model to be produced, on display at the Ship Centre. 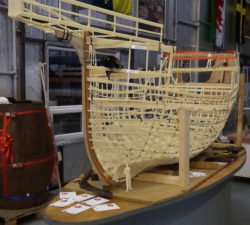 This is currently being ‘upgraded’ to show the ‘capital reconstruction’ of our Ship – with higher stern- and fore-castles than originally suggested.

In 2014 the fruits of over a decade of study allowed for the publication of a comprehensive article in the International Journal of Nautical Archaeology (Volume 45, No. 2, September 2014) summarising the finds so far. An article on the ship’s dendrochronology (tree-ring data) was published in the same volume.

In that year we hosted a sell-out conference in conjunction with the University of Bristol ‘The World of the Newport Ship’ which has now been followed up with the papers from the contributors published in there most complete form.  This wonderful volume is available from the Cabin in the Ship Centre and Guidebook and Book.

As the conservation stage moved towards completion the project is planning the next phase “reassembly”, part of which will be to find a permanent home for the reassembled ship. The Friends continue to help fund the project and raise awareness about this extraordinary vessel.