The timbers of the Ship, as recovered, were not as they appear lying in the storage rooms cleaned, preserved and awaiting reassembly. When taken from the Usk river the timbers were covered in varying amounts of mud and concretion, a hard packed layer of iron caused by the environmental conditions of the Usk estuary meaning that the ship would need to be thoroughly cleaned before any recording could take place.

Each timber had to be carefully cleaned, beginning with just clean tap water to remove the largest debris and moving on to using soft toothbrushes and dental tools in the final stages to avoid damage to the fragile timbers, all while having to keep the wood wet to prevent it distorting from drying too quickly. 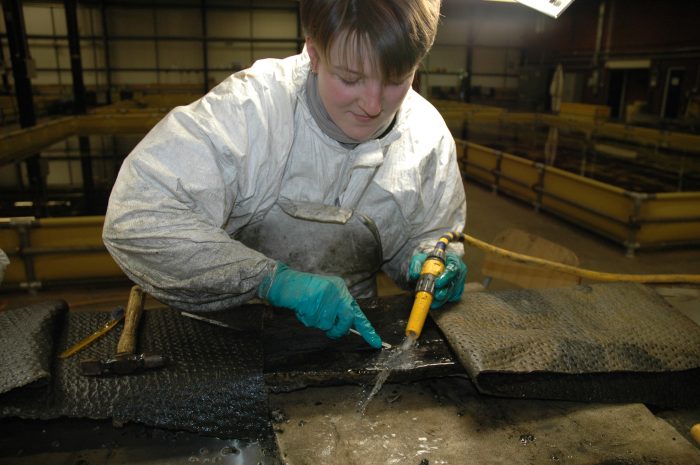 A member of the conservation team cleans timbers prior to recording.

Once the cleaning had been completed the Newport Ship Project was left with a number of choices over how to record the ship and its artifacts. The first choice was to record the timbers via the traditional method of paper drawings which is time intensive and can be error prone, this also leaves you with a two dimensional copy of the item that is difficult to manipulate without visiting the artifact in situ. Another option available to the team was to take 3d laser scans of the timbers, which while incredibly detailed would create massive file sizes that would be difficult to manage on a personal computer or to transfer across the web. Another downside would be that the entire ship model would require incredible processing power in order to be useful for research or to help in reassembly.

The Goldilocks solution was to use a piece of technology pioneered to detect defects in the wings of aircraft, the FaroArm. The Newport Ship was one of the first marine archaeology projects to Pioneer the use of FARO equipment and RHINO software to produce 3-dimensional rotatable images of each Ship timber and each artifact found within the vessel with submillimeter precision.

The Newport Ship’s Curator, Toby Jones, using a FaroArm to record a ship timber into the computer.

This allows for the close study of each timber and the accurate recording of blemishes, damage and the previously unsuspected “builders marks” on some timbers as well as merchant’s identity marks on some barrel staves.

Thanks to the FaroArm and the 3d models it creates this has allowed the Newport Ship Project to take full advantage of 21st Century technologies to help bring the ship to life this includes a fully accurate 1:10 scale model of the Newport Ship 3d printed by Cardiff University using the data provided by the project. Not only is it visually impressive but it also helps the project team have a better idea of how the ship was originally constructed, as they had to build the ship in miniature in the same order as the original shipwrights, but it also provides a blueprint of how to reassemble the ship later on down the road.

You can see below a video produced for us by the Arts & Humanities Research Council on the Recording and Conservation efforts made by the Newport Ship Project on its 10th Anniversary as well as the ship model itself.

A number of other videos about the ship and its history are available. These are just a few.